More has been written about diet than almost any other subject under the sun. And the more you study nutrition, the more confusing it becomes, with an endless stream of theories about what you should and should not eat – many of them contradicting one another.

If you are suffering from hypoglycemia, the chances are you have already experimented quite a bit with your diet. You might have been to an alternative health professional who has given you dietary guidelines to follow, or you might, like me, have started reading on the subject of nutrition in an effort to find an answer to your health problems.

During the past 20 years or so, I have read extensively on the subject of diet

And not only have I studied countless nutritional theories but I have also experimented personally with many of them. Macrobiotics, the Pritikin diet, the Hay diet (food combining), the Aarola diet, vegetarianism, Ayurvedic diets, not to mention elimination diets for food allergies – you name it and I have probably studied it, if not tried it out on myself.

I spent many painful years seeking for the truth about diet. This included about three years going down the track of food allergies to find out why I was feeling so terrible.

It began with tests by an allergy specialist in Wellington. He gave me a list of foods to which I was supposedly allergic and advised me to avoid them scrupulously for several weeks. Even a tiny taste of a forbidden food could trigger my symptoms, he said. My list of allergic foods was daunting. There were the usual ones like wheat, dairy products and eggs, as well as citrus fruits, apples, potatoes and several others which I cannot now remember.

With such a list of forbidden foods, I had to change my diet drastically. Eating out became a major problem for my hosts. I started eating a lot of dried fruit. It was among my “legal” foods and it seemed to satisfy my craving for something sweet, hence I would demolish a packet of dates in one sitting, or a packet of dried figs or apricots.

Looking back, it is hard to believe that I persisted so long with the food allergy line. My health improved little, if at all. Yet I was convinced I would one day find the food, or foods, to which I was allergic, and my problems would be over. I now believe the cure for so-called food allergies is to build up your general health and eliminate the root cause of the problem, which is a weakened immune system.

Many so-called allergies are actually food addictions. If you find yourself craving – and eating – large amounts of any food then you are almost certainly addicted to that food. Food addiction can be just as powerful as addiction to alcohol, cigarettes and drugs.

An underlying hypoglycemia, or low blood sugar, seems to exist whenever addictions occur. Tests have found hypoglycemia is almost universal in alcoholics.

The first step is to avoid all refined sugars and also-to restrict even natural sugars such as fruit and juices, as well as alcohol and caffeine. If you have low blood sugar, the chances are that you crave sweet things, especially when you are tired or under stress. In fact, if you regularly get irresistible cravings for sweet it is almost certain that you have low blood sugar.

So giving up sugar and sweet things can be an enormous battle at first. However, when you start to notice the amazing increase in your energy you will be less tempted to eat sweet things because you know the inevitable ‘slump’ will follow.

So, what is a healthy diet?

There’s no easy answer because almost every expert seems to differ. Some say you should eat lightly or even have no breakfast at all while others say breakfast like a king, lunch like a prince and dinner like pauper. Some promote a vegetarian diet while others say animal protein is essential for good health. Some believe whole grains should be the basis of the diet while others say ‘grain is for the birds’ and warn of allergies to wheat.

Some tell you to eat margarine or low-fat spreads, while others promote butter because it is ‘natural’. And then there is the endless list of foods and drinks which you should avoid, depending on which expert you read – in fact, if you believed everything written on diet, there would be very little left to eat.

Even the ‘official’ view of what makes up a good diet has not been consistent during the past 30 years or so. In the1960s, when I was a child, we were advised to eat daily from the ‘four food groups’ – meat, dairy products, cereals and fruit/vegetables. Milk was the old-fashioned type with a layer of cream on top and it was quite acceptable to pour the cream on your porridge. We were told to drink a pint of milk a day and eat plenty of dairy products and meat.

But things started to change in the late 1970s and early ’80s when Nathan Pritikin’s low-fat, high-carbohydrate diet caught the attention of the media. Gradually, the prevailing wisdom changed. Today, the official line from health authorities is that we should cut back on fatty dairy products and meat, and eat plenty of complex carbohydrates such as bread and pasta.

Pasta has become a gourmet food and ethnic diets have become popular because they are supposedly more healthy than the old-fashioned British fare of ‘meat and three veges’. Gone are the days of ‘bangers and mash’ for dinner, and apple crumble with cream. Instead, it’s pasta and salad, with frozen yoghurt (low-fat, of course) for dessert.

But the tide is starting to turn again. Many people who have faithfully followed the low-fat, high-carbohydrate gospel have found it doesn’t provide the boundless energy and super health that the experts say it will. In fact, many people wonder why they feel so lousy when they are so conscientiously doing everything ‘right’ and following the ‘food pyramid’ guidelines to the letter.

Because of the discovery that low-fat diets don’t suit everyone, books promoting low-carbohydrate diets are starting to make a come-back. In fact, this is the current wave of diet wisdom. Protein and fat – which for so long have been the ‘bad guys’ of nutrition are now okay to eat in large quantities – the Atkins diet being the classic example.

One explanation for the confusion and contradiction which exist with regard to diet, is the theory of ‘ body types’. This concept dates back thousands of years, to the ancient Hindus, Greeks and Romans, who recognised that people are born with different physical constitutions. Lucretius, the Roman philosopher, is credited with the saying “One man’s meat is another man’s poison” and there is the old nursery rhyme about Jack Sprat, who could eat no fat, and his wife who could eat no lean.

In the 1960s, Henry Bieler, in his book Food Is Your Best Medicine, classified individuals according to the dominance of their adrenal, thyroid or pituitary glands. Even before that, Dr William Sheldon had classified three basic physical types – mesomorph (muscular), ectomorph (thin) and endomorph (fleshy).

Dr Elliot Abravenal developed the ‘body type diet’ in the 1980s, using Bieler’s adrenal, thyroid and pituitary types, and adding a fourth the gonadal type for women. Thyroid types (of which I am one) tend to be thin, sometimes underweight, during their youth and when they do put on fat it is in a roll around their middle. Thyroid types crave sweet and starchy food, which stimulate the thyroid gland. They must be careful not to overeat sugars and starches, and must build up their weak adrenal glands with light protein foods such as eggs, chicken and fish.

Thyroid types should also add butter and oils to their food, to slow down the absorption of carbohydrates. They must be particularly careful not to overdo sweets, cakes and white bread products when tired or under stress.

Adrenal types tend to be solidly built and muscular. They love red meat, nuts, salty and fatty food which stimulate the adrenal glands and given them energy. They do best on a diet which is low in fat and protein, and high in complex carbohydrates.

Pituitary types tend to look boyish or girlish even as adults, and their cravings are for dairy products, which they can get addicted to. They should avoid dairy products until they have balanced their metabolisms and the less dairy food they eat, the better. Instead, they should eat meat, fish and poultry with whole grains and vegetables.

Women who are gonadal types love spicy, creamy and oily food and their weight tends to go on their hips. They do best with a light breakfast such as fruit or cereal, a moderate lunch and their main meal at night but avoiding spicy and oily dishes.

I suspect thyroid types tend to suffer from hypoglycemia more than any other. The diet recommended for thyroid types is essentially the same as that for hypoglycaemia.

Some experts recommend a list of vitamin minerals, herbs and other supplements as long as your arm, while others say you can get all the nutrients you need from a balanced diet. I don’t have any hard and fast opinion on supplements. I have tried various vitamins and minerals but never found any dramatic benefits, although I have heard of many others who attribute their recovery to a certain supplement.

Anti-oxidants are currently being promoted as a cure for virtually everything, including hypoglycemia. I have not tried anti-oxidants, largely because they are expensive and I have never liked parting with money unless I am reasonably sure of getting a good return on the investment. But I wouldn’t discourage anyone from trying anti-oxidants.

However, it is worth remembering that all supplements – even “natural” products – are essentially drugs and they do have side effects. Supplements can never take the place of a balanced moderate diet. You can’t continue your old, destructive eating habits and take a supplement, expecting it to work miracles. It just doesn’t work that way. It’s far better – and far less expensive – to work on your diet first.

The effects of a good diet should be dramatic within a few weeks. Only then should you consider whether you need to take supplements as well.

What your score means

A total score of less than 20 is within normal limits. A higher score is evidence of hypoglycemia and would indicate further testing.

"How to Beat Hypoglycemia for Good"
- a refreshing, common-sense approach to eating right to beat low blood sugar. Get this helpful report now. 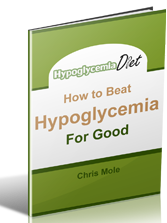 "Heal Your Hypoglycemia"
You can be free from symptoms within 14 days by changing your diet.